Since its debut on Kickstarter, Eiyuden Chronicle: Hundred Heroes has attracted attention for the contribution of Yoshitaka Murayama, a name that to many will say absolutely nothing, but that lovers of the JRPG genre with some years on his shoulders will remember for having given birth to a series long disappeared. Murayama, in fact, directed Suikoden from 1995 to 2002, then left Konami and founded first Blue Moon Studio and then, together with some former colleagues who had joined him in Suikoden II, Rabbit & Bear Studios. It was under this label that Murayama began a new project, a traditional role-playing game that recalls his masterpiece already in the title, but that unfortunately will come only in 2023.

In the spring, however, a prequel of sorts will be released, which we’ve played in preview: here’s what we discovered in our test run of Eiyuden Chronicle: Rising. 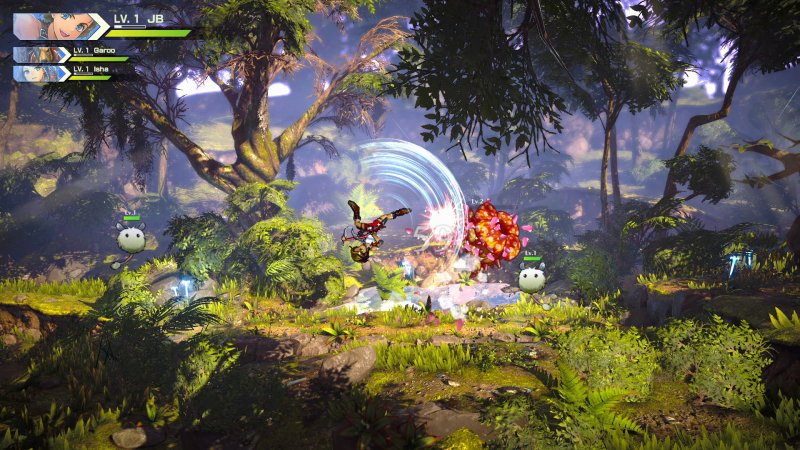 Eiyuden Chronicle: Rising, the scenarios are colorful and full of details

We say now and without too many turns of phrase that Eiyuden Chronicle: Rising, in the first moments of the game, has not made us a very good impression. Including the rigid animations and writing terribly trivial exposure and dialogue – all in Italian – our first approach was unhappy to say the least.

The story is about CJ, a young raider, that is, a kind of adventurer who arrives in the village of New Neveah in search of riches. There she makes the acquaintance of the temporary mayor, another girl named Isha, and discovers that in order to travel to the most dangerous and potentially lucrative places in the region, she needs a special document that will be issued only after collecting a certain number of stamps on her adventurer’s card. Resigned to this kind of hard work, CJ starts looking for jobs that, fortunately, are not lacking: the citizens are rebuilding the village and need materials and resources that we can find in the nearby forest and quarry.

Which are then the two dungeons that we played before the demo ended. The exploration takes place in two dimensions, in the manner of titles such as Dust: An Elysian Tail, Valkyrie Profile or Odin Sphere, to name a few ‘similar games belonging to various generations. Each zone is made up of one or more screens, and all you have to do is approach the sprite of an NPC to start a conversation, or open the list of discovered locations to quickly move between zones. It’s a convenient feature, but in dungeons it’s partially precluded: there we can only move between the entrance and the various save points reached.

The progression is initially dependent on a chain of main quests that will serve to unlock the first structures in the city, such as the base of the protagonist, where you can rest and save the game, or the tavern or the inn, where we can consume delicacies or take hot baths that give temporary bonuses. 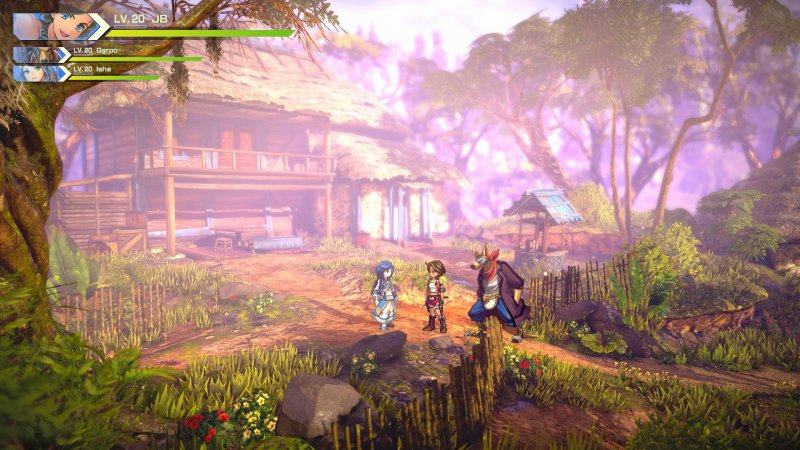 Eiyuden Chronicle: Rising, the three protagonists together in New Neveah

These missions will send us into the forest to get wood and other items by defeating enemies and destroying tree trunks. The first dungeon is extremely linear, with very simple platforming sequences and not very aggressive enemies that are defeated with one or two blows. CJ wields a pair of pickaxes and can attack with a very short combo: the control system is based on a button for jumping, one for the attack and one for the special ability that you learn after a few missions and allows the protagonist to dodge forward or backward. When needed, it is possible to call up a menu in which, among other items, we also find the backpack: there we’ll store potions and ointments that can help us recover PV during real-time battles. Leveling up does not restore the PV of the characters, and enemies tend to inflict a lot of damage.

As you might have guessed, this first glimpse of gameplay didn’t excite us. Eiyuden Chronicle: Rising has us going back and forth between the dungeon and the city to complete various tasks and unlock new structures, amidst stilted dialogue and less than charismatic characters. 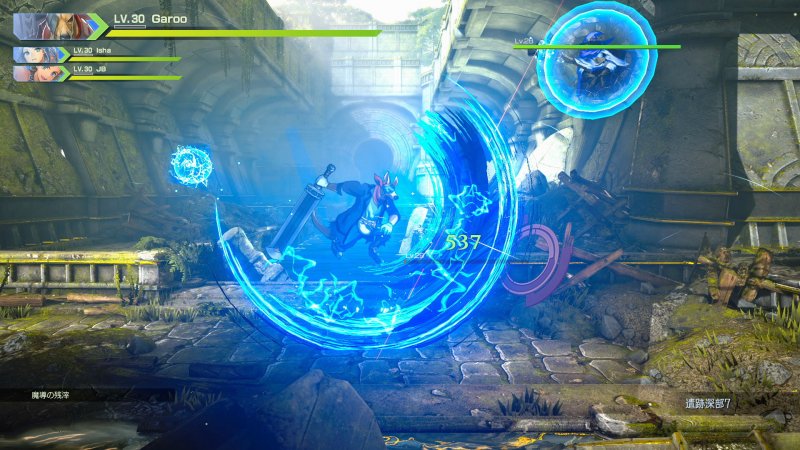 The situation improves markedly between the first and the second dungeon, when CJ, unable to enter the quarry without a tool capable of splitting the stones that bar her meal, decides to team up with Garoo, a mercenary armed with a broadsword that the game characterizes in a rather shady way. The introduction of this warrior in the team, net of a fairly repetitive back and forth from the city to the forest and then to the quarry and back, brings with it a number of new features in the gameplay that have awakened our interest.

For starters, the city is starting to fill up with structures, such as the alchemist and blacksmith, which suggest a much more interesting system of upgrading and character development. With the materials found in the dungeons we can improve weapons and armor, not only increasing attack and defense values, but also unlocking secondary abilities, such as additional combos and the like, which intervene in the combat system. Similarly, we can upgrade CJ’s tools to retrieve more, and perhaps better quality, materials when we go hunting for resources. 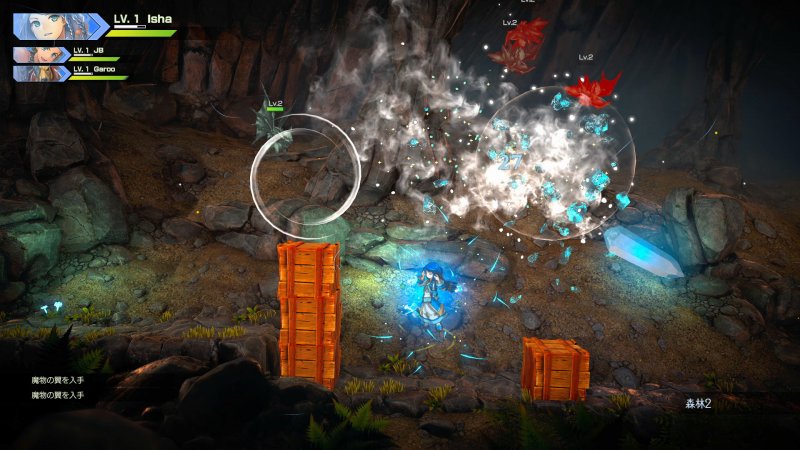 Unfortunately, we didn’t get a chance to develop the equipment beyond a certain level, but we found that the combat system improves exponentially with the introduction of Garoo and combo swapping. The latter can be entrusted entirely to the player, selecting Normal mode from the options, or automated in Relax mode: the idea would be that each character – and we know that the team will then join also Isha – is tied to a specific attack key, so alternating the pressure of these keys you can switch on the fly the controlled character to extend the combo and inflict bonus damage to enemies. In Normal mode you’ll need a fair amount of timing, while in Relax you only need to press one key to compile an entire combo.

In case you’re wondering what’s the point of a Normal mode if Relax does everything on its own, it’s simple: during the exchange combo animations, the incoming characters remain vulnerable to enemy attacks, and since each of them has an independent PV gauge, Normal mode allows for more control over the combat, which in some cases can mean the difference between victory and defeat. 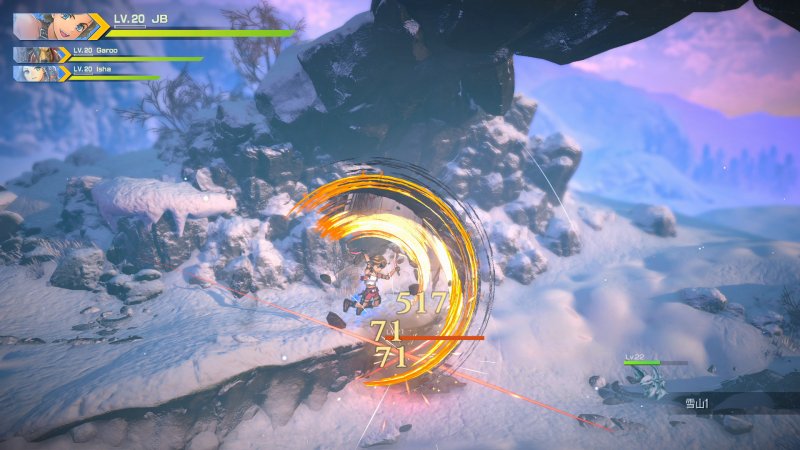 Eiyuden Chronicle: Rising, you can swap characters on the fly to extend combos

This feeling is especially noticeable during boss fights. We faced two in our demo, and while the first one – a demonic tree that reminded us of Nintendo‘s Kirby’s Wispy Woods – beat up hard but was pretty mundane, the second one – a stone golem that splits and throws damaging punches – gave us more of a hard time. The bosses are huge enemies, protected by a shield that must first be broken through: only then will the boss expose its weak point, which we can attack to defeat it.

We must say that we found the dodge of CJ not very useful, while the special abilities of Garoo are much more interesting: the mercenary can in fact charge the blow of the broadsword, which in this way can inflict much more damage or destroy the boulders that obstruct the passage, or put on guard for a moment, which, with the right timing, allows him to intercept the attacks and reset the damage. 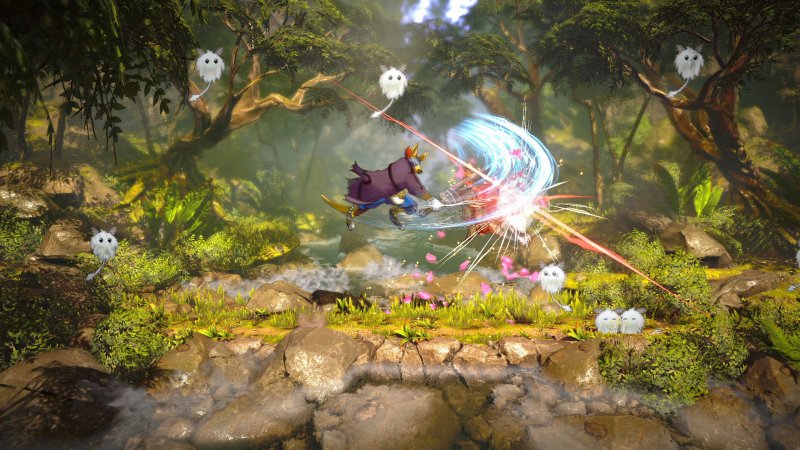 Once Garoo is unlocked, the structure of Eiyuden Chronicle: Rising takes on vague metroidvania overtones. The mercenary’s ability to break down stone walls, combined with the double jump CJ learns in the second dungeon, allow you to reach new rooms and make the frequent backtracking a little less repetitive.

There remain, however, some glaring problems that frame Rising as a risky title. Beyond the combat system that improves significantly, but remains quite flat in general, in the couple of hours of play that lasted our test we struggled to find a reason to follow the misadventures of CJ and his companions. Just towards the end we glimpsed a flicker of narrative, which suggests something more about the protagonist and the identity that hides behind the initials, but in terms of characterization there is really a lot of work to do. 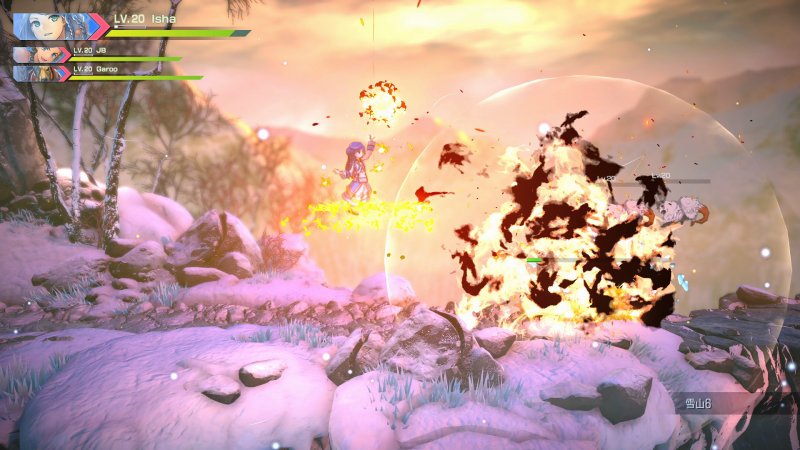 Eiyuden Chronicle: Rising should serve to better describe the world of Allraan and the characters that will later join the protagonists of the real JRPG, Hundred Heroes, when it comes out next year. In this sense, the 505 Games title is not really representative: the two games are completely different in terms of gameplay, and probably also in terms of technical. The scenarios we explored in Eiyuden Chronicle: Rising are enchanting, especially the forest, full of details and graphic devices that embellish each screen. The game is colorful and lively, too bad only for the pixelart can be improved, but still faithfully transposes a good character design. And yet we are talking about a support project, a kind of content developed to deceive the long wait for the main course: it may be that the full game does not reserve other surprises.

Eiyuden Chronicle: Rising develops slowly and, after a disappointing beginning, improves exponentially. As for the narrative, however, the title 505 Games has not really told us anything, but it is true that we played just a couple of hours, and that there were still many features to unlock, in addition to the third playable character. Our hope, in short, is that this starter JRPG coming out next year has more arrows in his bow than it seems, but for confirmation we will have to wait for the game to be officially released in the spring.

Digimon Survive: everything we know about Bandai Namco’s game

MotoGP 22, the test of the new official MotoGP game